Theatrical performance “THE CAVE” A partnership between dance, music and picture.

Cutting of a New Year Pie by Music Association of Hydra

A modern look at the allegory of the cave

in “State” by Platon

In Context of the celebration of “KONTOURIOTEIA 2013” honoring the 78th anniversary from the death of the first President of the Greek Republic, Hydriote Admiral Paul Kountourioti, as well as the 100th anniversary of the Balkan Wars 1912-1913,

in the roof of the Historical Archives – Museum of Hydra

will be heald the Theatrical Performance

a partnership between dance, music and picture.

The false reality of the ‘shadows’, the awakening, the search, the discovery, the consequences… come to life with great sensibility through modern choreographies and at the same time pictures are projected from modern life.

This project is a creation of the Cultural Group ICHODRAMA, in collaboration with famous choreographers and dancers with professional experiences in Greece and in the rest of the world (England, France, Germany, Cuba), graduates from professional dance schools from around the world, the State School of Dance, the National Opera and multiple recognized professional dance schools in Greece. The music is authentic, written especially for this project. The video art which consists of powerful images add to the dramatic effect of the presentation.

On Tuesday August 27th, 2013 in context of the celebration of the “Kountourioteia 2013” in the full of people terrasse of the Historical Archives – Museum of Hydra

was held with great success the theatrical performance
“THE CAVE”
a partnership between dance, music and picture
The audience admittedly left after the end of the show delighted.
Following are snapshots from the event: 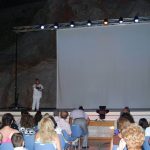 A while before the begining of the show… 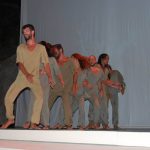 The dancers of “THE CAVE” during the show… 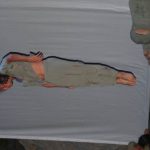 The protagonist in an impressive figure…. 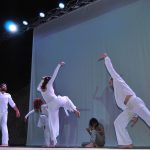 The dance performance in a stunning continuation… 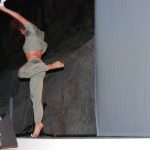 The impresive figure of the protagonist… 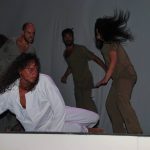 During the end of the performance… 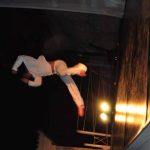 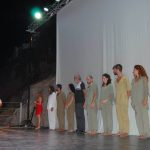 The thanks at the end…

Musical Tribute to the co-founders of H.A.M. of Hydra, GKIKA KOULOURA & ANTONIOS LIGNOS with Vassilis Saleas and a six-member orchestra.