Award ceremony for the “Maria Katzmani” award, in memory of the distinguished Art Historian and Critic Maria Kotzamani.

Screening of the Documentary “Who saves who” by Cinema Club Hydra

In the Historical Archives-Museum of Hydra on Saturday May 5th, 2014 the members of the Executive and Advisory Commitee gathered in order to select the winner of the award “Maria Kotzamani” among the works of students of Hydra who took partin the competition of the Foundation “CHRISTOS KARAS-YDRA”

The contestants competed in the following areas: A) Painting, B) Dancing C) Singing D) Music

The Chairwoman of the Executive Committee mrs. Dina Adamopoulou presented to the members of both Committees the contestants and their projects, the participants presented in turn their works, exhibited their paintings, danced, sang, played music. Admittedly they were all excellent! ..

The members of the Commitee were particularly touched by the spontaneity, imagination and skills of the children who competed and to which they send in writting a great BRAVO!..

The first prize and honorable mentions will be announced in the major awarding ceremony and honorable evening in memory of our distinguished art critic, the late Maria Kotzamani. The event will take place on Saturday May 31st at 8.30 in the Historical Archives–Museum of Hydra.

FOR THE FOUNDATION “CHRISTOS KARAS-YDRA”

The Chairwoman of the Executive Committee 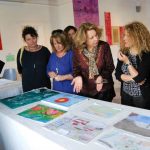 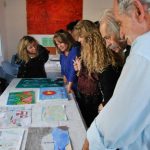 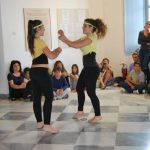 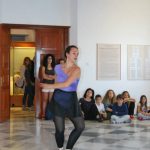 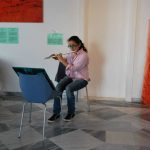 According to the attached invitation on behalf of the Historical Archives-Museum of Hydra, the foundation “CHRISTOS KARAS” and the Kotzamani Family, we have the great honor of inviting you to the celebratory and honorary award ceremony for the “Maria Kotzamani” award, in memory of the distinguished Art Historian and Critic Maria Kotzamani.

The event will take place on Saturday May 31st at 8.00 pm in the Historic Archives-Museum of Hydra.

Your presence wil honor us greatly.

The Chairwoman of the Executive Committe.

On Saturday May 31st, 2014 at 8.00 pm, Crowds thronged the roof of the HIstorical Archives-Museum of Hydra, were the honorary and celebratory event in memory of the distinguished Art Historian and Critic Maria Kotzamani. This event, to which the Athenian and the local press hailed and praised with related publications, was a collaboration between the Historical Archives-Museum of Hydra, the foundation Christos Karas and the Kotzamani Family. During the first part of the event Dina Adamopolou, Head of HAMH, Efi Andreadi, Art Historian and Critic, Nikos Karas, Artist, Thodoros, Sculptor, Fani Petralia, Journalist and Sonia Charalabidou, Architect and Professor at the Ethnicon Metsovion Polytechnion (EMP) all spoke about the life, personality and work of Maria Kotzamani. Furthermore Maria’s daughter mrs. Marina Kotzamani, professor of theatrical studies at the university of peloponnisos, read letters from multiple artists and other people to mark the unfair loss of her mother while behind her, the presentation screen projected photographs from Maria’s life.

The second part was followed with the presentation of the contestants who competed in the areas of art, dancing, singing and music. The first contestant, Albi Toska student of the 6th Grade of the 1st elementary school in Hydra showed us his dance moves. Next, the students Rena Rousi and Antonia Armadourou of the 1st Grade of the high school in Hydra presented us their dance duo to the song “The Mirrors”. The final dance presentation was performed by the student Stamatina Markadoni of the 2nd grade of high school. Next, was the student Katerin Rousi of the 3rd grade of high school who sung two songs a cappella. Finally the student Katerina Rousi of the first grade of high school took the stage and competed with her flute.Moreover, the paintings of the participating pupils were posted on a special board at the venue to enable the world to see and admire them.
The applause of the joint efforts of the students of Hydra was very warm and enthusiastic and a real reward for their great effort. The top prize, corresponding to a sculpture by the artist Christos Karas specially crafted for the occasion as well as the amount of 500 euro, won the student of the 6th grade of the elementary school, Chrysa Papamichail, who pleasantly surprised us with her skills in painting. Also with praise, corresponding to a lithograph by Christos Karas signed by him, were awarded the: Albi Toska (dance), Stamatina Markantoni (dance) and Katerina Roussi (song). It is worth noting that all of the participants received a poster of the event signed by Christos Karas. The admittedly exceptionally beautiful evening ended with a treat to the guests and to the students during which aired the video on the life and work of the late Maria Kotzamani. 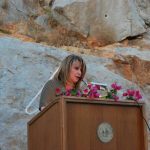 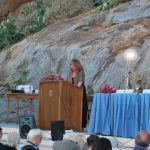 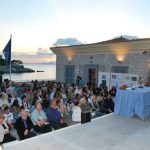 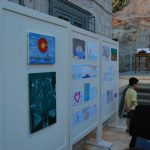 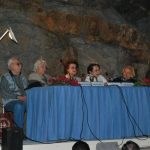 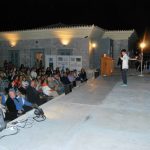 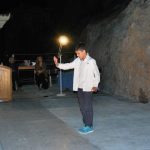 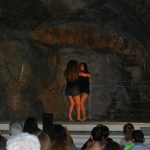 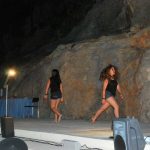 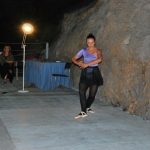 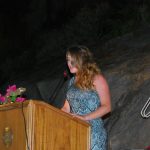 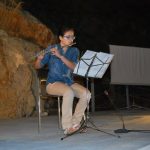 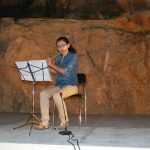 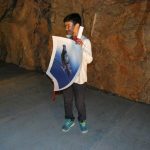 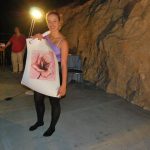 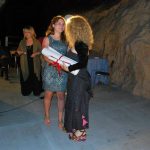 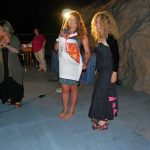 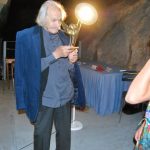 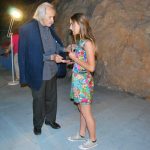 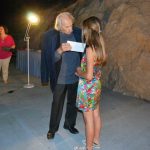 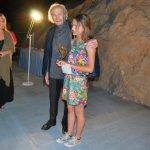 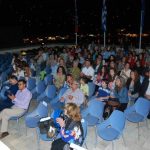 Musical Tribute to the co-founders of H.A.M. of Hydra, GKIKA KOULOURA & ANTONIOS LIGNOS with Vassilis Saleas and a six-member orchestra.