Historical Archives – Museum of Hydra (HAMY) receives daily large number of Hellenes and foreign visitors, in which important 19th century paintings and numerous objects- relics are set out from the Struggle of 1821, Hydriot costumes of the era, maps, navigation instruments, cannons, carved wooden figureheads and akrostolia of ships(decorative elements), construction models and ships’ lithographs of the Struggle etc. In the exhibition premises of IAMY representative samples of historical documents of the 18th-19th century are also exposed out of the almost 18,000 primary archival documents belonging to its collection as well as an impressive photo archive of the island with the long naval tradition and history, which moves visitors even today.

Regional Service of General State Archives (GSA), the Historical Archives-Museum of Hydra was founded in 1918 (Hellenic Gov. Gazette April 1918, N. 1289) and housed in a building built at the expense of Hydriot owner and benefactor N. Gikas Koulouras. In 1972, for manufacturing reasons the old building was demolished and in its place was built the new sizeable building, which was officially launched in July 1996 and has since operated on a daily basis (not excluding weekends) for researchers and the mass audiences of Hellenes and foreign visitors.

In its museum premises modern Hellenic art of 18th-19th and early 20th century, offers some of the most remarkable creations. Excellent work paintings are included in the museum collection of IAMY and through them Hall XI of the Museum has been converted into a Historical Gallery. As it seems, society of Hydra ascribed particular importance in the art of painting, since each affluent home had its personal valuable painting collection (see. Konstantina Adamopoulou, Catalog of H.A.M.Y. 1999, Ministry of Education and Religious Affairs, General State Archives, version of Society of HAMY Friends).

Notable painters of the era, like Kriezis Andreas (1813-1880) and Gerasimos Vokos (1861-1902) from Hydra, but also the Austrian Francesco Pige (1822-1862), responding to the requirements of small Hydra society, have put their artistic talent in the service of the island and painted, upon orders, representations of major historical events, figures of Fighters or portraits of relatives of many families in Hydra.

In particular, the Gallery includes three thematic sections of works: a) portraits (mostly oil paintings) of historical figures, b) portraits of ships from the Struggle and younger ones and c) a remarkable collection of nautical charts. The oil painting of naval combatant Emmanuel Tompazis is a fabulous work of an unknown painter, it represents him leaning against the railing of his ship, probably in the Tombazis family schooner, the “Terpsichore”.

Also, wonderful is the painting of Gerasimos Vokos representing noble Eleni Dim. Kriezis from Hydra with apparel of the era. The portrait of Hydriot doctor Ioannis Tetzis, work of the painter with Austrian origin Francesco Pige, is another work of the important ones exhibited in IAMY. The Magna Carta of Rigas Velestinlis Feraios is decisive in the entrance hall area, crafted by the great Hellene visionary and printed in Vienna in 1793.

In this area one can also admire the portrait of Andreas Miaoulis, the greatest admiral-agonist of Hydriot Navy Struggle created by the painter Georgios Rapsomanikis (1880). Another special exhibit impresses the guest. This is the silver lekythos (urn) with the embalmed heart of Andreas Miaoulis. King Otto ordered after the death of Hydriot hero, on June 11, 1835, to distract his heart and place it in the lekythos as a symbol of bravery and patriotism. On top of it there is the inscription “HAIL HEART OF ANDREAS MIAOULIS”. Lekythos with this pilgrimage was donated, in honor, to Hydra, the hometown of Miaoulis. In the same area the effigy of Miaoulis’ Cross has been placed with the written elements “Cross is believers’ support” (horizontal antenna) and “Sign of Cross is enemies’ terror” (vertical antenna). According to the testimonials, Admiral had this cross with him in all his naval operations and the critical moment of the attack he preceded it against the enemy. 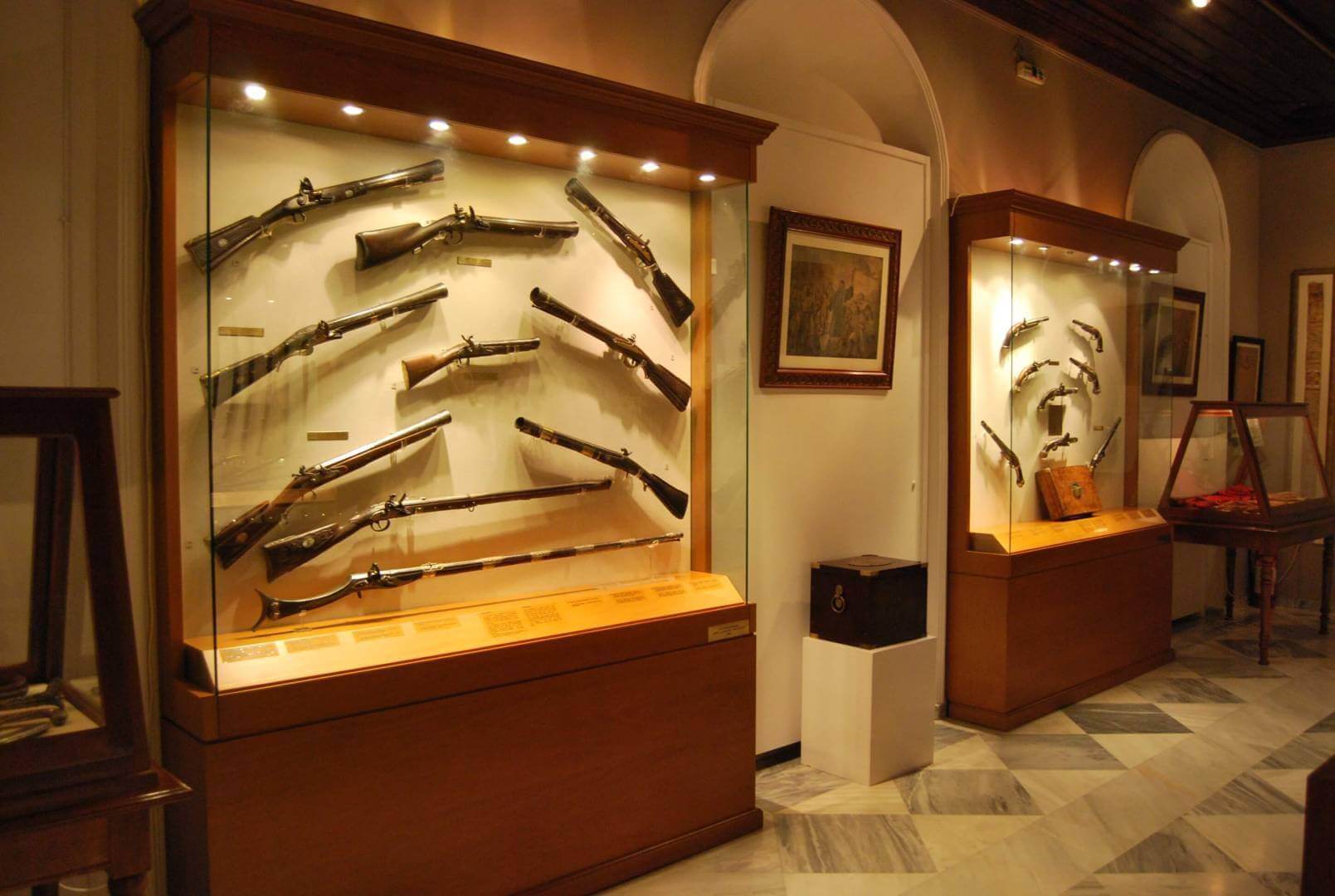 In the exhibits of the museum are also included weapons of Hydriot naval combatants, trombones, pistols, swords, kariofilia (type of rifles) etc… During the years of Hellenic Struggle against Ottomans the privilege of buying good weapons was mostly held by islanders and certainly the Hydriot seamen, who because of their travels were able to choose and to procure weapons from abroad, mainly from the ports of Spain, England, France and Italy. Visitor can admire the trombones of Georgios Sachtouris or Andreas Pipinos, the silver decorated pistols of Yakoumakis Tompazis but additionally the swords of fighter Panourgias or Turkish – loot weapons from various victorious sea fights of the Hydriot fleet..

Historical Archives have a rich material for historians and interested researchers. Regarding manuscripts, these amount almost to 18,000 and there are 122 –mainly handwriting – codes and community ledgers, covering the time period from the early 18th to the mid 19th century.

In the collections of Historical Archives of Hydra are also included individual folders of Fighters and personalities such as Theodoros Kolokotronis, Ioannis Makrygiannis, Andreas Miaoulis, Ioannis Kapodistrias and sigil of Patriarch Gregory V and many Philhellene letters.

The preservation and classification of this archival material, which gives a lot of information on the situation of Hellas during the previous two centuries, is due to the Hydriot history investigator Antonios Lignos, who as Director of HAMY from 1920 to 1953, publishes with donations of the island’s Community and sometimes of rich Hydriots, the 16 volumes of “Hydra’s Community Archive”, the five volumes of the “Archives of Lazaros and Georgios Kountouriotis”, the three volumes of ” History of Hydra island “, the calendar of the Struggle’s ship “Miltiades” and numerous monographs and historical studies published in magazines of the time such as the “Future of Hydra” or “Herald of Aegina”. For his contribution to this historical research, Lignos was awarded with the Kitsos Makrygiannis Award and was nominated a Corresponding member of the Academy of Athens].

In department of Contemporary Archives of HAMY continues to enter, upon selection, archive material from public services of the island, such as training, administrative, religious, collective records etc. as well as many private Archives of persons or Entities, which are important sources of historical research for the locale and promote historically the leading role of Hydra from the early 18th century to the present day.

The Library of H.A.M.Y. is not a lending library and includes, so far, approximately 15,000 volumes of books, mainly old and rare publications, many of which date from the early 18th century. Its content is constantly enriched with new versions of historical and archival interest, but also with literary books, magazines, newspapers etc.